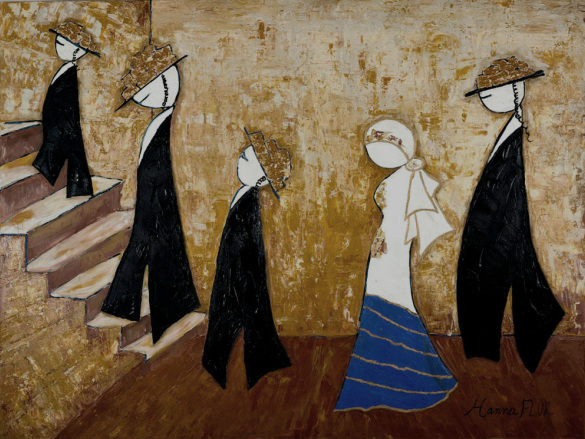 "Ascension" Acrylic on canvas 200x160 cm. 78.7x63 inches
The
2009- version of Ascension is the main picture of the exhibition at the Budapest
Gallery. The size of the painting is significantly bigger then its predecessors
but the painter has even intensified the message of the philosophic manifesto.
This time she's (herself, the woman character) walking in the line with the men
which is formally less provocative then the 2003 version but its feminist charge
is even more serious since she's walking with the orthodox men as an equal
person (the figures are all airy their feet won't touch the ground - not visible
at all). The woman carries stones too however she's doing that not on top of her
head but in her body - at her forehead, breast and belly.